Change Starts with One 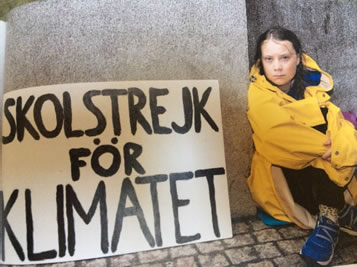 In August 2018 Greta Thurnberg began her movement alone, sitting in front of the Swedish Parliament to pressure the government to meet the goals of the Paris Agreement. Thornberg has succeeded in creating a global attitudinal shift, transforming millions of vague, middle-of-the-night anxieties into a worldwide movement calling for urgent change. She symbolizes the agony, the frustration, the desperation, and the anger of many young people worldwide. Leaders respond to pressure, pressure is created by movements, movements are built by thousands of people changing their minds. And sometimes, the best way to change a mind is through the eyes of a child.

Within a year there were climate strikes beyond northern Europe. In New York City, 250,000 marched in Battery Park and outside City Hall. From London to the streets of Germany and in nearly 600 other countries. Change starts with one.

Some simple changes to lessen our carbon footprint.

The Rise of Healthier Proteins excerpted by Jamie Ducharme 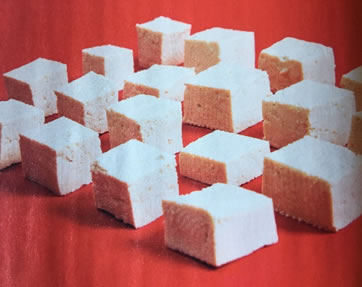 Swapping our beef for plant-based alternatives turns out to be good for both you and the planet. A global switch to substitutes like tofu could cut greenhouse emissions by 25%. We need big changes to tackle the climate change challenge immediately. Just limiting the amount of red meat in our diets will make a great contribution to this effort.

It turns out that Americans are obsessed with protein. It’s touted as the cornerstone of our healthy diet. It helps people feel full and builds muscle. But most Americans eat too much protein every day, according to federal estimates. The one that many are overeating is red meat. It’s becoming clear how big a problem excessive red-meat consumption can be for health. Research has found associations between diets heavy in red and processed meats and many chronic diseases, including type 2 diabetes, heart disease and cancer. There is a high amount of saturated fat. Processed forms like bacon and sausage often contain chemicals that have been linked to cancer.

Protein found in plants is linked to the opposite: lower rates of many of the same diseases and longer lives, thanks to the fiber, healthy fats and micronutrients that come with it. There are lots of choices for protein-rich plants. Beans, peas and nuts aren’t just beneficial for health but also for the planet. The World Economic Forum in January 2019, published a report that if people all over the planet made one change-switching from beef to other sources of protein would cut global food-related greenhouse gases by 25% and reduce diet-related deaths in wealthy countries by 5%. Raising cattle is hard on the land and the environment.

Peas are gaining recognition as a healthy green giant

excerpted from article by Larissa Zimberoff 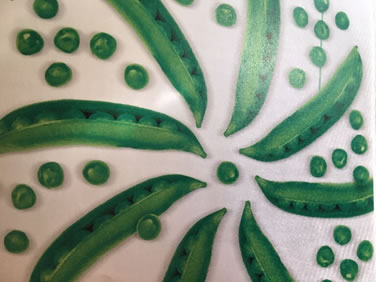 As a crop, peas check the boxes against the biggest problems of climate, food and health. From a sustainability standpoint, peas do everything wheat, corn and soy don’t. They require less water, are drought tolerant, reduce the need for nitrogen fertilizers because they take nitrogen from the air and store it in their roots. They are an ideal candidate for crop rotation. Allergies to peas are extremely rare.

There were 757 new pea-related foods that hit the shelves in 2018. That was in addition to what was already out there. The biggest is the Beyond Meat product being sold in fast food chains. They had one of the strongest IPO’s in the last two decades. Peas are broken down into building blocks of function: starch, fiber and protein. We have kicked off a paradigm shift toward plant-based foods. This comes after the U.N. named 2016 the International Year of Pulses, which include peas, lentils, chickpeas and beans.

Just What the Doctor Ordered-Food is the Best Medicine

The medical community is starting to consider the possibility that food is the best medicine. A community hospital in Pennsylvania launched a program in 2017. It is called the Geisinger healthcare system. They are specifically helping patients learn how to eat heathy to save their lives. They are finding that prioritizing food and preparing healthy meals are more impactful than medications themselves.

The program is part of a groundbreaking effort to finally consider food as a critical part of a patient’s medical care-and treat food as medicine that can have as much power to heal as drugs. Food is becoming a particular focus of doctor, hospitals, insurers and even employers who are frustrated by the slow progress of drug treatments in reducing food-related diseases like Type 2 diabetes, heart disease, hypertension and even cancer.

Foods to live by 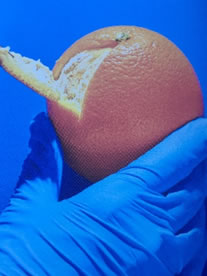 They are rich in vitamin C, which can increase the production of certain immune cells in the body. These cells can control overactive immune reactions in autoimmune diseases such as Lupus. 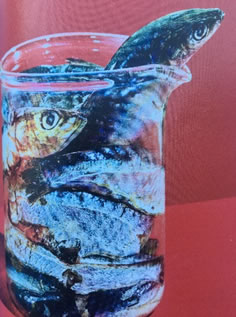 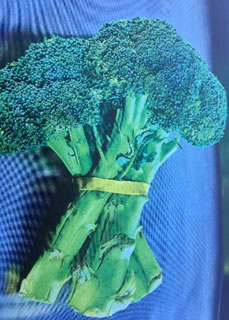 This vegetable is loaded with glucosinolates which convert to compounds that can slow breast-cancer cells from growing in the lab.

Roughly 90% of American adults do not eat enough fruits and vegetables. It is understandable that many of these people try to make up for it by taking vitamins. According to the Council for Responsible Nutrition, three quarters of American adults take a dietary supplement of some kind. Multivitamins, many people believe, are and easy wand surefire way to get all the essential nutrients they need.

Nutrients consumed via supplements do not improve health and longevity as effectively as those that are consumed through foods, according to the study. To be more effective, nutrients should come from food. Getting enough vitamin, A, vitamin K, magnesium, zinc and copper where all associated with a lower risk of dying early-but only if those nutrients come from food.

In fact, some supplements even appeared to come with health risks, according to the study. People who took high doses of calcium via supplement ad a 53% higher risk of dying from cancer than people who were not taking supplements. But excess calcium from food was not associated with a similar uptick in mortality risk. Similarly, people who took vitamin D supplements but were not deficient in vitamin D had a higher risk of dying. Certain populations, like the elderly, may benefit from certain supplements who often struggle to absorb nutrients from food that may lead to deficiencies. For the rest of us, a balanced diet is a good bet for a healthy future. 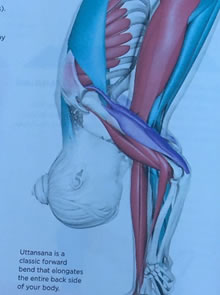 Uttanasana (Standing Forward Bend) is a common pose that gently massages your abdominal organs, calms your nervous system, and stretches your back body (hamstrings, glutei, and back muscles). The pose which is an integral part of Sun Salutations and flow yoga, improves balance, stimulates circulation, and challenges breathing by strengthening your diaphragm, which must work harder to inhale in this inverted orientation.

Getting into the Pose

I like to reach my arms straight up then push my hips back as I engage the core and circle my arms wide and take the head and arms down toward the floor. The hands can be resting on a block, your shins or the floor. Keeping at least a slight bend in the knee to prevent hyperextending. Focus on the stretch in your hamstring muscles. Relax the neck and take 3 to 5 deep breaths. Then roll up slowly separating each vertebra as you come up. Take a moment to reorient yourself in space.

Anatomy of the Pose 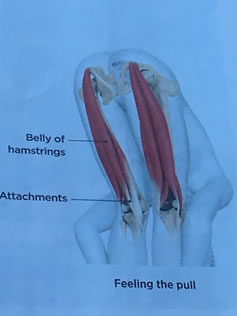 As your weight is brought forward, your ankle dorsiflexors engage, stabilizing your feet and ankles further into dorsiflexion

When your upper body releases to gravity, your spinal extensors (the muscles attached to the back of your spine that enable standing and lifting) and latissimus dorsi (the largest back muscle, which protects and stabilizes your spine and contributes to back and shoulder strength) are stretched.

Your hip flexors engage and your quadriceps muscles, extend your knees to stabilize the bend. By pulling gently toward your legs, your arm muscles will flex your elbows while the muscles around your rib cage engage to stabilize, protract, and upwardly rotate your shoulder blades. 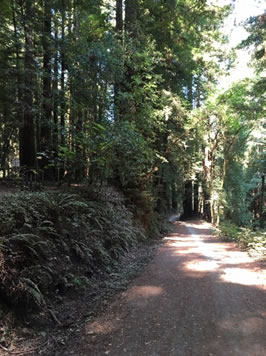 When we think about energy, we often think about the physical and metal types. It’s easy to identify when we are lagging, and most of the time we know how to replenish or balance them. But energy is more than what fuels the body or the mind. Many ancient traditions such as yoga, Taoism, Buddhism, and Hinduism-plus modern physics-teach that everything in the universe is energy. A table, computer or a bicycle are all forms of energy. Each of these vibrate at a speed that allows you to see, touch, and use it. Every thought, feeling, and experience you have also has a unique energy vibration that is imprinted into the body in the form of physical sensations and then hopefully released on the wave of the breath.

An aspect of yoga is the subtle body anatomy called the gunas, which is Sanskrit for strands or qualities which are energetic forces that weave together to form the universe and everything in it.

There are three gunas, each with its own unique attributes: tamas (stability), rajas (activity), and sattva (consciousness). It might help to think of gunas as tendencies: the habitual ways you respond to any situation that arises. All three gunas are preset in every experience in a constantly shifting relationship with one another. One quality is always more present than the others depending on what challenges you are facing.

Life can disturb their delicate balance. These energies are entwined. Tamas provides our foundation; rajas give it vitality and breath; sattva imbues it with consciousness and compassionate awareness.

Life is like riding a bicycle – in order to keep your balance, you must keep moving

I was searching for a solution that would complement Yoga and help people with aches and pains, chronic conditions and allergies. Doterra Essential Oils are the solution that I was looking for. I am so excited to share these powerful gifts from nature’s medicine cabinet.
- READ MORE -

Ever since we started Yoga with Sandra over two years ago, our health has been great. We used to have occasional neck, shoulder and back pain which had gone on for days. Yoga made us more flexible and more resistant to injury. Even when we get occasional pain, we do a few Yoga poses...
- READ MORE -

Yoga Therapy is designed to create an individual practice for your health needs using a variety of Yoga props and techniques for $50.00 per hour